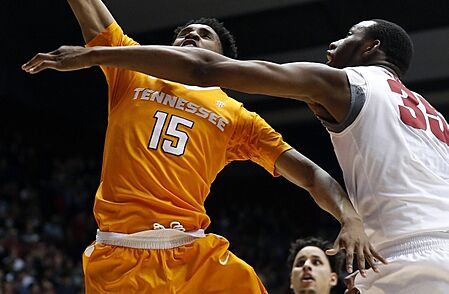 Tennessee basketball blew another second-half lead and used lack of effort and stupidity to lose to the Alabama Crimson Tide 63-57 in Tuscaloosa Tuesday.

When you’re leading a team by 15 points in basketball in a defensive struggle in the second half, the formula would seem to be smart shots and relying on tough defense to win the game.

That is, of course, unless you are Tennessee.

The Vols blew a 48-33 second half lead and a six-point lead with less than three minutes to go in Tuscaloosa Tuesday night against the Alabama Crimson Tide to lose 63-57, a common theme for this team throughout the season as they consistently show no consistency in learning the up-tempo system employed under first-year head coach Rick Barnes.

After leading the Tide 25-24 at halftime, Tennessee kept up the defense and used a nice offensive run to build a 48-33 lead.

But instead of relying on that defense, they decided to jack up threes on offense. The defense was still there, more like Alabama’s lack of offense, but Tennessee showed no effort to do anything on the offensive side of the ball.

Following that lead, Tennessee players all decided it would be a good idea to miss as many three-pointers as possible and not even try to fight for buckets under the basket. The Vols finished the game missing 12 straight three-point attempts and only making three field goals the rest of the way.

But even after the Vols used the free throw line to build their lead back up to 55-47, they couldn’t hold on. They made one field goal the rest of the way and showed no effort on defense after that.

Kevin Punter led the team in scoring with 15 points, Admiral Schofield added another 10, and Robert Hubbs III had 13. But Hubbs, once again, showed no effort as a shooter down the stretch.

While the rest of the team jacked up ill-advised threes, he was the only major player who didn’t attempt any shots from outside. His lack of aggression from the other side was just as inexcusable.

Perhaps the dumbest part of the game came after Alabama tied it at 55 with a minute and a half left. Devon Baulkman jacked up an ill-advised three one second into the shot clock, and after Alabama got the rebound, Admiral Schofield decided to foul right there with them already in the bonus.

The result was two free throws, both of which were made, that spotted them a 57-55 lead.

Tennessee lost this game on one of its abysmal shooting nights from outside. But the sad part is it didn’t have to be that way.

A little effort and intelligence could have avoided this loss. That was clearly too much for this team to handle.