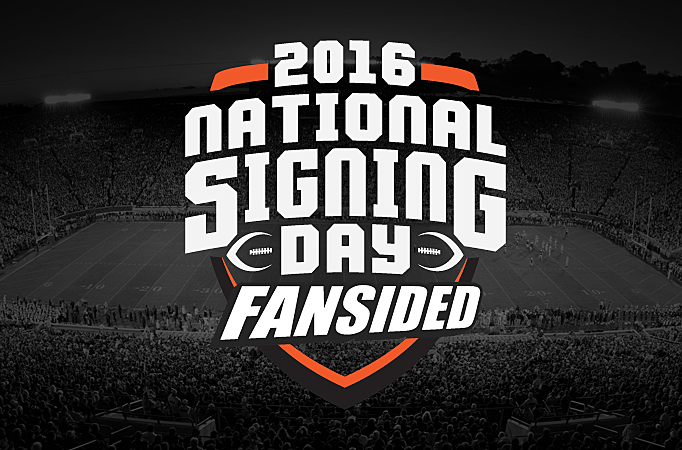 For the week leading up to 2016 National Signing Day, check Tennessee football recruiting news, updates, and analysis here. See how the Volunteers perform.

Now comes National Signing Day. This is Butch Jones’s fourth recruiting class, and after back-to-back Top Five recruiting classes, a drop-off was expected. But for this group, quality is still stressed, even more so with a lower quantity.

So with so many juniors and seniors coming up, Tennessee football recruiting for 2016 is still crucial to the future of the program. If the class does not pan out, the program could be in serious trouble beyond 2016, and it won’t meet its goal of sizing up to Alabama on a consistent basis.

In the Clubhouse (17 COMMITTED) (Rivals Star Count Next to Name)

Who is Tennessee strongly in the running for?

Easily the best player the Vols could pick up this recruiting class, Derrick Brown is a superstar in the making and could see the field immediately with his raw talent, even if Tennessee is loaded on the defensive line.

Brown at first did not appear to have Tennessee on his radar, as he was simply committed to Kirby Smart. But he appears to have had an amazing visit to Knoxville, and the result is the Vols having a very good chance to pick him up. He tweeted out the lyrics to Rocky Top this past weekend as well, so this is another one where random circumstances point to him possibly choosing Tennessee.

Sorry to disappoint you football populists, but recruiting rankings don’t lie. Sure, you can have a solid program if you recruit diamonds in the rough and never have a top recruiting class. But Alabama has proven over the past seven years that recruiting, and recruiting alone, is the best determinant for how great the program will be.

There have been much lower expectations on Jones and the Tennessee coaching staff this year because of how much they stocked the cupboard the previous two years, but they are about to lose a lot of talent in the next two years. That makes the quality of these athletes that he recruits that much more important. So while he may not need a Top Five class again, a Top 15 to Top 20 class is very important.

2. How much of an impact will the new staff additions have on recruiting?

Butch Jones hit back to back homeruns when he brought in Larry Scott from Miami to coach tight ends and then Bob Shoop from Penn State to be the new defensive coordinator.

Scott has spent his entire coaching career in Florida and has built huge connections down there, and he also has connections recruiting in Georgia. With a guy like Derrick Brown on the board, that’s a huge deal.

Meanwhile, Shoop is by far the best defensive coordinator and probably the best defensive coach in college football, and part of his greatness is his ability to recruit, which he did at Vanderbilt. You would think his high profile would help a few prospects make last-minute decisions to eventually sign with Tennessee. We’ll find out what happens.

3. Can Tennessee score a good class without a top prospect from its home state?

Recruiting in Tennessee has always been tricky because the state has decent talent, but you have to recruit great talent around the bordering states to make sure you can bring in a top class. If you can fence off the state and then do that you’re in good shape.

However, he still nailed a couple of talented players from the state, including four-star Ryan Johnson from Brentwood and Daniel Bituli from Nashville. Add in Austin Pope from Knoxville and you have a solid collection of players to help the class. But without the elite of the elite crop, Jones had to do more national recruiting this year. Will it pay off? We’ll see.