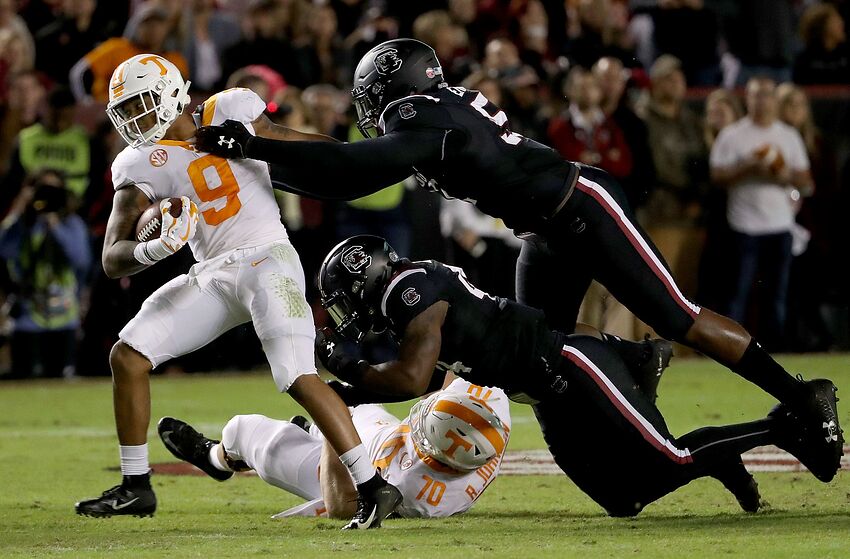 COLUMBIA, SC - OCTOBER 27: Teammates Kingsley Enagbare #52 and Sherrod Greene #44 of the South Carolina Gamecocks try to stop Tim Jordan #9 of the Tennessee Volunteers during their game at Williams-Brice Stadium on October 27, 2018 in Columbia, South Carolina. (Photo by Streeter Lecka/Getty Images)

Tennessee football’s 27-24 loss to the South Carolina Gamecocks had lots of key moments. Here’s where the turning points were for the Volunteers.

There were plenty of chances for Tennessee football to close the deal on the road against the South Carolina Gamecocks Saturday. But they couldn’t do it, and as a result, the Vols fell to 3-5 on the year with the prospects of a bowl game that much harder.

Fans will rightfully blame quite a few missed calls by the refs, most notably a clear fumble by Rico Dowdle on the one-yard line that they gave back to Will Muschamp’s team. However, there were too many other chances for the Vols to win this game.

Had they won, there would have been plenty of key moments for them, including Shy Tuttle’s interception, the numerous third-down conversions and another epic field goal by Brent Cimaglia. But they didn’t get it done. So let’s look at the key moments that cost them. Here are the turning points from Tennessee football’s loss in Columbia.

In the first half, down 14-3, the South Carolina Gamecocks had their backs against the wall. However, they got their first sign of life late in the second quarter. On third down, Jake Bentley hit Deebo Samuel, who made an amazing one-handed touchdown grab. Going into the half, the Gamecocks needed this to stay in the game with the Vols. And they got it.

Tennessee football was epic on third down plays this game. However, as one was about to come up in the red zone, Marquez Callaway committed an unsportsmanlike conduct penalty that cost the Vols 15 yards. They had to play for field goal range, as a result. That field goal drive turned out to be a huge difference in the game.

Just as the Vols took a 24-16 lead with a Brent Cimaglia field goal, they were hoping to regroup on defense. Unfortunately for them, that didn’t happen. Jeremy Pruitt saw his secondary give up a 73-yard pass from Jake Bentley to Bryan Edwards the very next drive. That set up a touchdown run and a two point conversion by Bentley. Fans will point to a clear fumble by Rico Dowdle on the goal line that the refs missed, and they did miss it. But this was the play that set it up, and you can’t blame the refs for that.

South Carolina stops the Vols on 4th and 7

You have to give Jeremy Pruitt for showing guts. With the game finally tied at 24, he wanted his team to keep control of the game. Jarrett Guarantano had missed a third down play, and Pruitt decided to go for it on fourth down past midfield instead of letting Cimaglia trying a 52-yard field goal. The reasoning is understandable, but Cimaglia has shown he can make those kicks in the past. So Pruitt maybe should’ve trusted him. However, he didn’t. And he put the ball in Guarantano’s hands. Guarantano’s pass was tipped at the goal line, and South Carolina got the ball, setting up a field goal drive to give them their 27-24 lead.

Tennessee football and Guarantano were stopped again on a fourth down play the next drive that involved a horrible sequence by Marcus Tatum specifically. However, thanks to Pruitt’s brilliant decision to hold onto his timeouts, the Vols had a chance to get a stop. Instead, though, Rico Dowdle bounced a second down run to the outside for 30 yards. The play was enough to allow South Carolina to run out the clock. It was brutal, but once again, the Vols fought hard at least.