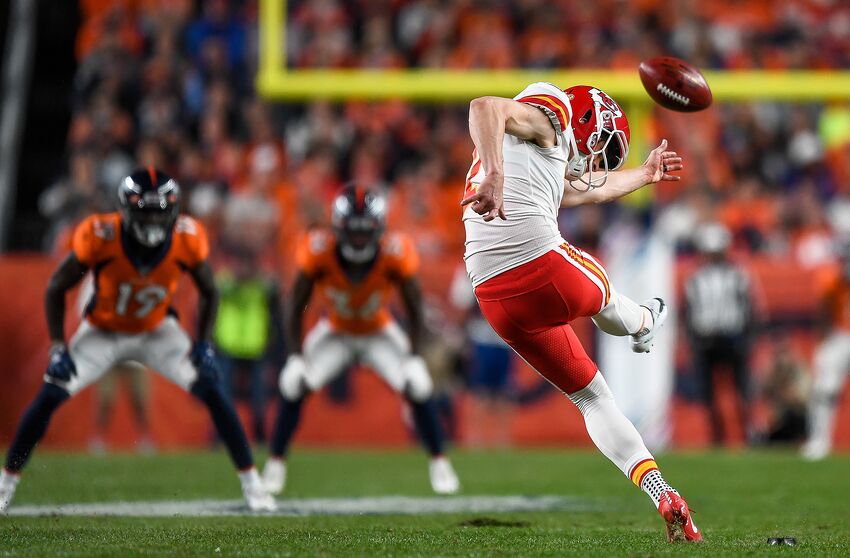 DENVER, CO - OCTOBER 17: Dustin Colquitt #2 of the Kansas City Chiefs kicks off against the Denver Broncos in the second quarter at Empower Field at Mile High on October 17, 2019 in Denver, Colorado. (Photo by Dustin Bradford/Getty Images)

He once single-handedly won two games for Tennessee football. Now, Dustin Colquitt has made his mark as an NFL punter in the midst of his 15th year with the Kansas City Chiefs. And as they beat the Denver Broncos Thursday night, he joined a rare group of punters.

Colquitt had six punt for 266 yards, averaging 44.3 yards per punt. But three of his punts went inside the 20-yard line. In the process, he joined Shane Lechler and Jeff Feagles as the only three punters in history to have 450 punts pinned inside the 20. His third punt inside the 20 was the one to hit the 450 milestone.

And the guy is not done. Lechler has 469 punts pinned inside the 20 for his career. Dustin Colquitt will likely break that later this year or early next year to move to No. 2 all time behind Feagles, who is way ahead of everybody with 554 punts inside the 20.

However, Feagles played for 22 years. And Lechler played for 19. By the time he reaches just the number of years Lechler played, there’s a very good chance that he surpasses Feagles for this record. After all, Colquitt pins a higher percentage of his punts inside the 20 than Feagles or Lechler did, and he averages more per year than either punter did.

Related Story: 15 Vols who were better in the NFL

Considering how good the Chiefs’ offense has been in recent years, ever since the arrival of Andy Reid, Colquitt will likely have more punts near midfield as well and more chances to pin punts inside the 20. Simply put, it’s a ways away, but there’s a chance he could actually break this record.

Nobody on Rocky Top is surprise about this. Dustin Colquitt was a legend when he played with the Vols from 2001 to 2004, and he should have won the Ray Guy Award in 2003. He may be the best of all the Colquitt punters, and he’s certainly better than his brother, Britton Colquitt, despite his brother having the stronger leg and having a ring.

Anyway, the Colquitt family in general is a big reason for UT being Punter U, but Dustin Colquitt has had the biggest impact on that in recent years. In 2003, the Vols would not have beaten the South Carolina Gamecocks or the Miami Hurricanes without him.

Next: Tennessee-Alabama: 10 keys to the game

Now, in the NFL, he has continued to be a model of consistency. It’s clear that he is one of the best to ever do it, and he deserves a ton of respect for that. Thursday night was just another example of his greatness.